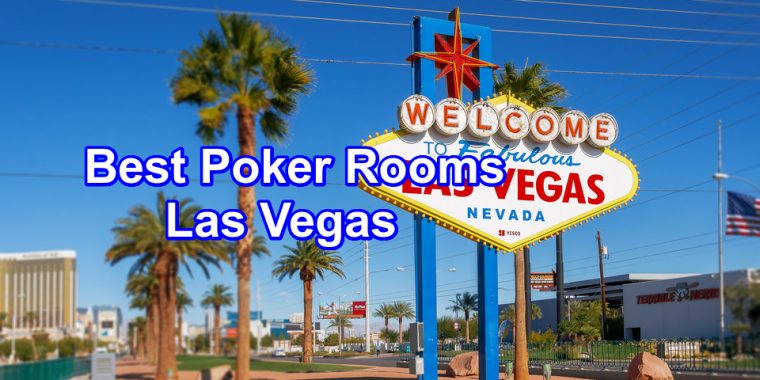 Anyone can put together a list of great poker rooms in Las Vegas. But what are the best poker rooms in Vegas to make money at in 2022? Much of what makes a good poker room depends on your skills and what you’re looking for. I’ll get into these things in this post.

Here are the 10 best poker rooms in Las Vegas:

If you’re good enough to make money in almost any poker situation, the poker rooms at the top of the list have the most tables and plenty of good games. But if you’re looking for a smaller experience, Las Vegas offers plenty of profitable opportunities also.

Here are the 10 best poker rooms in Las Vegas in 2022, including information about the games available in each:

1 – The Poker Room at Wynn Encore

When you play poker at the Wynn Encore poker room in Las Vegas, you might see some of the professional poker players you see on television. But that’s not why this poker room lands on the top of this list.

The Orleans poker room operates 24 hours a day and has 35 poker tables. They offer cash games and poker tournaments.

Like every other poker room in Las Vegas, you can play Texas holdem. But the holdem games aren’t why I like The Orleans.

If you like to play Omaha hi-lo or seven card stud hi-lo, The Orleans will be your favorite poker room in Las Vegas. A lot of poker rooms offer Omaha high only, but it can be hard to find good hi-lo games.

Located just off the Strip in Las Vegas, I recommend The Orleans for every poker player visiting Las Vegas in 2022.

I mentioned that you might see some famous poker pros when you pay at Wynn Encore. The only poker room in Las Vegas where you might see more pros is Aria. Aria even has a special section, called Ivey’s Room, named after poker pro Phil Ivey, where high limit games often run.

With 24 poker tables, Aria Resort and Casino doesn’t have the highest number of tables in Las Vegas. But Aria offers the best mixed games in the city as well as draw games, Omaha, seven card stud, and of course, Texas holdem in limit and no limit.

You won’t find many draw poker games and mixed poker games in Las Vegas or anywhere else. While these games aren’t as popular as Texas holdem if you want to play you have to visit Aria on your next trip to Las Vegas.

The highest published limits for pot limit and no limit games are 10-20 and 40-80 for limit games. But higher limit games run when enough players want to play for higher stakes.

You might ask why the Venetian poker room ranks fifth if it has the most poker tables and looks great. It might have just been the times I played there, but I found it easier to find profitable tables at other poker rooms than at Venetian. Your experience might be different.

6 – Poker at the Golden Nugget

The poker room at the Golden Nugget might not be as big or fancy as some of the other rooms on this list. But you might recognize it from television series including High Stakes Poker, Poker After Dark, and Face the Ace.

But this doesn’t mean the MGM Grand poker room doesn’t belong on the list. It belongs on this list because good poker players can always find profitable games there.

A list of the best poker rooms in Las Vegas to make money in can’t be complete without Caesars Palace. If you want to play Texas holdem poker tournaments, Caesars Palace poker room lands at the top of the list.

With 18 poker tables and constant tournaments running, cash games aren’t the main raw at Caesars Palace. But they do spread no limit Texas holdem games at 1-3 and 2-5. Other games and higher limits are spread when enough layers want to play, but most of the time they just have the low limit no limit Texas holdem games and tournament tables running.

South Point poker room is where many Las Vegas locals come to play. Located south of the Las Vegas Strip, it’s not far from the other poker rooms on this list.

10 – Binion’s Poker Room – Where It All Started

Binion’s poker room doesn’t have the best table, dealers, or atmosphere in Las Vegas. In fact, if it weren’t for the history of Binion’s and poker, I wouldn’t include them on this list of the best poker rooms in Las Vegas.

Benny Binion opened Binion’s in 1951, making it one of the oldest casinos in Las Vegas. The World Series of Poker started at Binion’s Horseshoe in 1970. And Binion’s has been home to some of the biggest poker games in history. But all of that happened a long time ago.

Binion’s no longer hosts the World Series of Poker and no longer uses the Horseshoe name. However, many older gamblers still call it Binion’s Horseshoe.

The main poker room at Binion’s now only has six tables. But I’ve heard that they operate up to 10 tables at times. The last time I visited they only had six tables.

I don’t recommend spending too much time playing poker at Binion’s. But I do recommend visiting the Binion’s poker room at least once for the history. Every other poker room on this list offers a better poker experience than Binion’s.

Can You Make Money Playing Poker in Vegas?

Here’s the most important question in this post. Can you make money playing poker in Vegas? While I don’t know anything about your poker skills, I have some good news.

You can find just about any poker game and level you want in and around Las Vegas. And you can find some of the toughest and easiest games within a short distance from each other.

Of course, you want to improve your poker skills as much as you can. But you also need to learn how to identify the best games with the worst players. And Las Vegas has some of the worst poker players in the world.

How Tipping Poker Dealers in Las Vegas Hurts Your Profit

Before I continue, I want to clarify that I’m not against tipping good poker dealers. But you do need to understand how tipping poker dealers in Las Vegas hurts your profits.

Every dollar you tip a poker dealer in Las Vegas comes directly out of your profit. So if you win five hands in an hour and tip the dealer $1 on each hand, you lose $5 from your profit. And if you tip $2 per win, you lose $10.

A good level to shoot for in limit poker games lands somewhere around the upper betting limit. So if you play $10/$20 Texas holdem you shoot for $20 an hour profit on average.

I tip poker dealers as long as they do a decent job running the game. And when I run across a truly great poker dealer I occasionally tip them a bit more. But I closely track my tips, and if a dealer doesn’t do a good job or mistreats players I don’t tip them.

Usually, I tip $1 on every hand I win. I don’t play many hands usually, so I rarely tip more than $3 n hour on average. When a great dealer leaves the table, I often tip him an additional dollar or two. But there are so few great dealers that I don’t do this often.

When you play cash or ring games in Las Vegas poker rooms, or poker rooms located elsewhere, the dealer collects a percentage of the pot on every hand. The dealer places the money collected, called the rake, in a collection box at the table.

When you find poker tournaments in Las Vegas, the entry fee usually has two fees listed. The first fee shows how much goes into the prize pool and the second fee shows what the casino takes as profit.

You see a list of upcoming tournaments and a no limit Texas holdem tournament showing $100 + $15. In this example, you pay $115 to enter the tournament. The casino makes $15 in profit and the other $100 goes directly into the prize pool.

Where Do the Pros Play Poker in Las Vegas?

Pro poker players in Las Vegas play where they can make the most money. This means you might find a poker pro in just about any poker room in Las Vegas.

The most common places you find professional poker players in Las Vegas are the Aria and Wynn Encore poker rooms.

Professional poker players go where they can make the most money in Las Vegas and other areas. But winning money at the table isn’t the only way a pro can make money. Pro poker players can make money by being paid to play at certain locations, from comps, and from advertising deals.

If you want to avoid the poker pros in Vegas, play off the strip. And if you want to play against the pros, start with the Wynn Encore poker room and the Aria poker room.

Where Do the Locals Play Poker in Vegas?

I just covered where you’re likely to see pro poker players in Vegas. But where do the locals play in Vegas?

Other than the local professional poker players, local poker players tend to play in different poker rooms than tourists. Locals usually play poker off the strip.

I covered South Point poker and The Orleans poker room above, so I’ll cover a couple of other poker rooms for Las Vegas locals here.

You can play poker at Station Casinos in and around Las Vegas offers three different locations.

Santa Fe Station poker room has 14 tables with eight seats per table. Most games are Texas holdem, but Omaha games are offered as well.

Where Are the Worst Poker Rooms in Vegas?

I hesitate to answer when asked about bad poker rooms. A friend was planning a trip to play poker and asked me where are the worst poker rooms in Las Vegas. I gave him an answer, which I’ll share with you. But I’m also going to explain why I don’t like making a worst poker rooms list.

The worst poker rooms in Las Vegas are the ones Downtown not listed above.

I used to dislike where the poker room was located in the casino. The games were profitable, but the location wasn’t great. But they eventually moved the poker room and I love the newer location.

Las Vegas has been called the poker capital of the world. But how do you choose which poker rooms are the best in Sin City? A lot depends on your definition of what makes a good poker room. But I’m writing this post so I’m going with what I know.

Every poker player visiting Las Vegas needs to check out the poker room at Wynn Encore. But my favorite poker room in Las Vegas has been The Orleans for a long time.

Other good poker rooms in Vegas include Aria, Bellagio, and Venetian. In fact, any of the Vegas poker rooms listed in this post offers good poker options.

If you like a smaller poker room, check out the rooms at South Point, Binion’s, or one of the Station Casinos.